Veena Kapadia and Ranjani “Ren” Sankaran co-founded the Flore Foundation to honor the life of their close friend and classmate, Flore Hiensch.
December 8, 2022 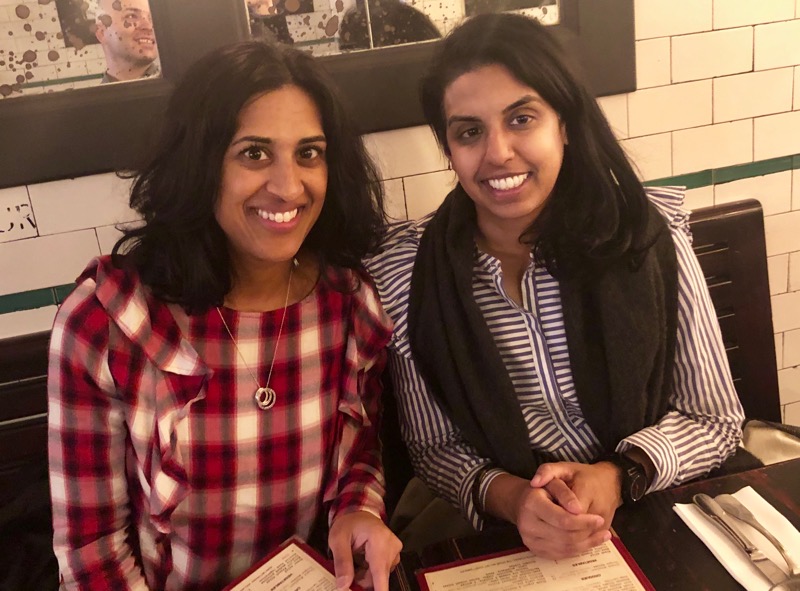 Veena Kapadia and Ranjani “Ren” Sankaran co-founded Flore Foundation to honor the life of their close friend, Flore Hiensch. The three formed a bond while graduate students at GW’s Elliott School of International Affairs, where they all graduated in 2004.

GW: How did you come up with the idea of the Flore Foundation, and how did you execute the plan?

Veena: In her career and her studies, Flore focused on refugee issues including resettlement, international migration, and humanitarian assistance. After graduating from the Elliott School in 2004, Flore joined UNHCR at the refugee camp in Dadaab, Kenya, and then continued her work in Afghanistan, South Africa, Senegal, Malawi, and Malaysia, before returning to work in Europe, often working on the front lines and front end of refugees seeking resettlement. To carry on Flore’s legacy, we thought that a foundation focusing on the next step of refugees’ lives once they have been resettled, in their new host countries, would be a positive way to continue her journey and contribution.

Ren: Executing the plan took some time and legwork as we were also doing this in our spare time outside our full-time careers (and in different time zones with myself in the UK and Veena in the U.S.). While we had many high-level ideas of what we wanted to do, the crucial parts in the beginning were practical aspects we had to learn as we went along, such as setting up a 501c(3) organization in and of itself. Ultimately, about three years later in 2018, we set up Flore Foundation providing grants to social enterprises that are either led by refugees or that support refugees in building entrepreneurial skills and employment experiences, as well as mentoring support.

To date, Flore Foundation has provided seven grants to organizations predominantly in the U.S. but also abroad – including one managed by fellow Elliott School alumnae, RefuSHE – in sectors including translation services, food products and culinary experiences, arts, and textiles and fashion. Most often, the refugees we support are social entrepreneurs or organizations that are training refugees to be entrepreneurs in their new community.

Particularly with the recent events in Afghanistan and Ukraine, the Foundation’s work is even more meaningful for us, as we know Flore would have wanted to actively help those affected.

GW: What drew you to the Elliott School for your graduate studies? How did you all meet?

Ren: The primary reasons both of us were drawn to the Elliott School were its integration into the center of Washington, D.C., with a number of faculty coming from major institutions in the area, such as the World Bank, IMF, leading think tanks/NGOs, and U.S. government agencies; the ability to pursue meaningful internships for the two years of the program; and also the ability to pursue a concentration in both international development studies and economics.

We all met on one of the first days of the program, at one of the career site visit days. With similar interests in international development and finance, we ended up visiting a couple of the same organizations and got to talking…and have continued ever since!  I found the Elliott School had such an international student body, with our classmates having had unique and interesting previous work experiences, as well as a genuine interest in international affairs, politics, economics, and the world around them.

GW: How did the Elliott School influence your professional choices and successes?

Ren: While I was a second year at the Elliott School over 2003-04, I had an almost year-long internship working with senior advisors to Secretary of State Colin Powell to produce an Africa Policy Advisory Panel Report on capital markets and financial sector development in Sub-Saharan Africa. That was a foundational experience for me that also led to my job post-graduation at the Millennium Challenge Corporation, a U.S. Government development agency, working on financing in the infrastructure, power, and agribusiness sectors, and in varied markets such as Madagascar, Namibia, Georgia, Mongolia, Sri Lanka, East Timor, and Vanuatu. At the time, we were financing some of the largest investments that had been pursued in some of these countries, and the extensive on-the-ground and senior-level government exposure in my twenties is something that has stayed with me.

Eventually I moved to London, pursued an MBA and went to work in energy and infrastructure project finance at Standard Chartered Bank where I have been for about the last 13 years. Given my focus on Sub-Saharan Africa and emerging markets, the background I have from my time in Washington, D.C., and the Elliott School has been very useful in terms of understanding the macroeconomic fundamentals in various countries and industries and understanding how key multilateral organizations operate.

Veena: I loved the global perspective in Washington, D.C., and held several internships at trade organizations from the U.S. Chamber of Commerce to the U.S. Trade Representative’s Office. Each opportunity deepened my interest in trade promotion and the benefits in developing economies. Before graduating, I was recruited to join a consulting firm to work on projects with the Department of Defense in security cooperation. As a management consultant, I developed a strong business foundation, which was incredibly helpful when we started Flore Foundation. I left Washington in 2012 to be closer to family and now work to make healthcare accessible to immigrants and underserved people.

My time at the Elliott School was the most exciting and influential. I grew my network and developed lifelong friendships along the way. These have stayed with me while I have shifted my career focus.

GW: How has diversity and inclusion impacted or influenced your work with Flore Foundation?

Veena, Ren: With the opportunities we have had in our education and careers, we are also trying to ‘pay it forward’ for the next generation. Through Flore Foundation, we are trying to promote inclusion of refugees in their resettled countries, and thereby the diversity of those participating in the broader economy and community. We have a mix of male and female grant recipients and business leaders working with refugees from various nationalities and trying to help lift the barriers that refugees may tend to face in integrating into further education or economic life. We recognize the impact women have in the family when allowed the opportunity to work outside of the home. Therefore, we have selected a number of organizations that focus on training women entrepreneurs.

Equity for refugees resettling in the United States and Europe often requires an understanding of unique cultural norms. Flore Foundation acknowledges these strengths in the programs we fund and seeks out organizations that help level the playing field. DEI is about creating a culture that is welcoming and without fear. In this environment, people can be innovative and free to thrive.

GW: What would you say to current Elliott School students who want to make a positive difference in the world?

Veena, Ren: Maximize your internship experiences during your time at the Elliott School. Discover what most interests you and become an expert in it. When an opportunity is presented, take advantage of it. Be authentic and allow those around you to inspire you as Flore did for us. The Elliott School has fantastic resources through the network, guest speakers, and class offerings. Build your lifelong friendships and you may end up collaborating on something together in the future. Reveal your voice – for us, that is what Flore Foundation is all about – sharing refugee stories that we first understood from Flore.